Well, it's over. Congratulations to Crotty, who won the contest in his first year of trying, but didn't pay so all he'll get is our undying adulation.

Even more congratulations to Biebel, who has won 1st prize in this year's contest, and R Schlegel and Harlan, who win 2nd and 3rd prize, respectively.

There were 59 paying entries in this year's contest, so you all can do the math for yourselves. Checks should be in the mail next week, to Biebel, R Schlegel, and Harlan, as well as Adams, McKillip, and Whiteside, who split the prize for leading after selection of the field.

Full final standings may (as always) be found at the "Standings" link on the right side of the page.

The rumor is that the NCAA will probably irrevocably alter the greatest sporting event on Earth, expanding to 96 teams next year and likely killing the proverbial golden goose. But that's a lament for another day.

Have a great year, everyone.
Posted by DK at 9:46 AM No comments:

We were looking for omens. It's a long drive from Philadelphia to Indianapolis, and on Friday, April 2, we were unsure what the weekend would bring. We crossed Pennsylvania without seeing anything unusual, and left West Virginia in the dust (which felt good). Soon after that, however, the psychic vibes became evident.

Two trucks vied for supremacy in the right and middle lanes, the one with "Baylor" scrawled across its side moving confidently ahead of the one reading "Old Dominion." An RV with "Georgetown" written in large letters seemed to be stuck in first gear as little compact cars with Ohio license plates raced past it.

And then we saw it. A towering pole with a sign in the shape of a crown, and a single word etched inside. And suddenly all our doubts evaporated into the Ohio air. We knew who the champion would be. And all seemed right with the world. 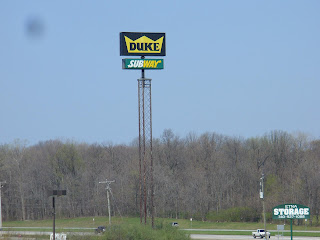