The '90s had just begun. The first George Bush was president (that's W's dad, for those not old enough to remember). Driving Miss Daisy won Best Picture. Vanilla Ice had a #1 single. And the commissioners had an idea. 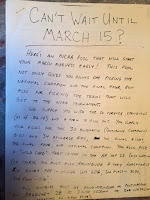 We had 18 contestants. The entry form was handwritten. Pools were filled in, verified, and scored by hand. Newsletters were distributed by fax, hand-delivery, or snail mail (back way before anyone called it "snail mail"). It was the first Pre-NCAA Contest, the birth of history.

It was almost a stillborn birth. On the strength of picking Texas (a team that made the Elite Eight) as his wildcard, commissioner D Kedson won his own pool, with 360 points. Fortunately, the other 17 contestants realized it was a fluke and the Contest continued.