Everybody's heard of Joe Lunardi, the self-proclaimed "Bracketologist" who's all over ESPN from December to March, year after year. Well, back in 1996 hardly anyone had heard of him. He was an assistant AD at St. Joseph's and was involved with a fabulous publication called the Blue Ribbon College Basketball Yearbook.

He was also a contestant in our contest. 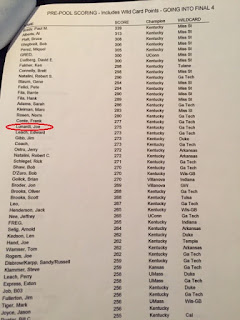 In 1997, Mr. Lunardi had a couple of phone conversations with one of our commissioners. In possibly our proudest pool-related moment, he told us our contest was the best pool in which he'd ever played (seriously, he really said that). 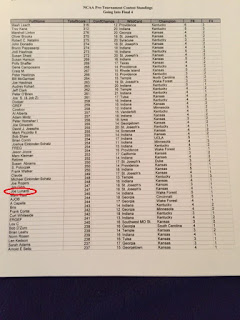 In 1997 Lunardi started writing a Blue Ribbon NCAA prediction column, which was soon picked up by ESPN. Coincidence? We think not. Though we'll never know for sure because Lunardi stopped taking our calls. The rest, as they say, is history.

For the record, the world's best-known bracketologist finished 18th in our contest in 1996, and tied for 43rd in 1997. On one of his entry forms, he picked Syracuse twice (both as conference champion and at-large, which was possible (though not recommended) in those days because the entry form was still on paper).